Twyford Parish Church is dedicated to the Assumption of the Blessed Virgin Mary, as are several neighbouring churches and this indicates that it was situated on a pilgrim route. It is a Grade 1 Listed building and originates from the C12th.

The south side is dominated by the C16th porch with a Norman arch richly decorated with two depths of moulding containing carved pagan symbols and heraldic beasts depicted on the capitals.

On the stonework of the porch, there is evidence of the residents using the stone to sharpen their arrows while waiting for the service to start. People had no means of sharpening their arrows in their wooden houses and found the Church porch the most convenient place.

The Tower was built in about 1320 and contains a modern clock and a peal of 6 bells which are often rung.

The main body of the church is C14th and C15th composed of stone rubble and mortar
In the churchyard, there is part of an ancient preaching cross circa C13th.

One of the unique features of the church is the evidence on the outside walls of a Mass dial. These came into existence in the early Middle Ages being a primitive form of sundial and marked the times of the services by using a wooden peg to cast a shadow. In 1808, Robert and Elizabeth Hughes of Winslow had a daughter called Ann. In 1833, Ann married a Mr T J King from Twyford and they had two children, a boy and a girl but unfortunately her daughter died when only nine months old.

Ann’s husband abandoned Ann and the children and went to America so Ann moved back to live with her parents.

Ann’s sister, Eliza, encouraged her to attend a Sunday school at a house in Twyford and Ann was subsequently baptized on 3rd November 1846. Ann became an enthusiastic member of the Twyford Cottage Fellowship and the group flourished mainly because of her enthusiasm.

In 1849 Ann purchased a piece of land (which we understand had been the village Pound), “and from a kind Christian friend a loan sufficient to erect a chapel” and on 29th August 1849, the building work commenced. It became a strong group of Christian fellowship with a large Sunday school, all part of the Marsh Gibbon group of Congregational Churches. Sadly, on 1852, Ann died of Typhus at the age of just 45.

The Chapel was further expanded with another adjoining building (the current Chapel) built in 1891. 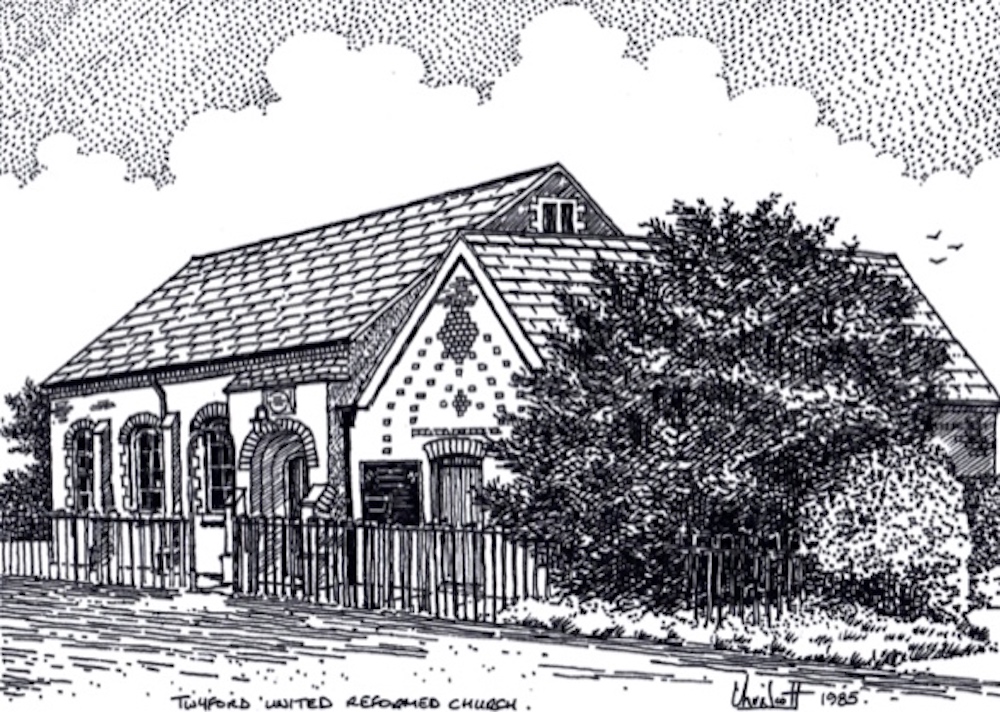 The Mission Hall is on land that is owned by FCC Environment who run the landfill site and the Calvert Energy from Waste plant.

The Mission hall is on the nature reserve but it has suffered a huge amount of damage through vandalism over the last 10-20 years due to local children using it as a bit of a den. This is despite BBOWT trying to keep them out by boarding it up on several occasions.

Recently, the locals have moved on to using the bird hides for these same activities but the generally poor state of the structure has not improved.

Since the route of HS2 was announced, its fate of demolition has pretty much been sealed as it sits firmly in the HS2 land take area at Calvert and so will be lost to a new maintenance track that will be put in alongside the new rail line. The importance has again been mentioned to HS2 but the state of the building means that there is no real chance that anything worthwhile could be saved, which is a sad loss of this historic hall. Free Church services were being held at Charndon as early as 1844.

In 1874, a house was purchased from a Mrs Stopp for £40. A year later, Mrs Stopp wished to return to Charndon so her money was refunded, but the services continued in her cottage. The Congregationalists from Marsh Gibbon gave spiritual guidance, and a Chapel was opened on September the 27th 1881. To raise money for this Chapel an appeal went out from a Revd D.G. Truss:

“The village of Charndon, containing a population of over one hundred and fifty souls, is without a Church or Chapel. A revival of religion in the village of late has rendered the cottage absolutely useless”

A suitable site was purchased and a plain substantial building commenced, capable of seating one hundred and fifty people at an outlay of (extra’s and site included) £180. The Charndon people were almost exclusively of the agricultural labouring class, and consequently poor. They did however exercise great self-denial in order to contribute to the building fund.

So many people attended the opening service on 27th September 1881 that the Revd Truss conducted the service inside and Revd Feltham of Winslow preached to the people outside.

Minutes of the early church meetings seemed to be kept to a minimum, the main business being nominations for people to become church members. It is interesting to note that records of collections taken were for specific purposes, namely, Minister, Coal and Oil, sweeping and cleaning, Horse Hire Fund, The poor, etc.

In 1924 the Memorial Sunday School room at the back was opened by Mr Heely of Wing. The cost of building this was £192, some of which was borrowed from the National Sunday School Union.

Midweek meetings of fellowship, prayer and bible study were held and Sunday services in the morning and evening. Sunday School, which was well supported, was held in the afternoon until 1965 when it was incorporated with morning worship. As many as 36 scholars were on the books in the 1960s. In 1981,

As far back as 1961, concern was felt about the state of the building and various repairs carried out over the years. In 2001, the building was demolished, and a residential home built on the site.